In search of the ideal tourist route points do not forget that you need guides in LatonsWii,on whose shoulders you will be able to shift the care of the information and the organizational part of the tour. In case of independent study of the sights, be sure to look at what hours they are open for tourists and how much the entrance costs.

1. House of the Blackheads (Riga) 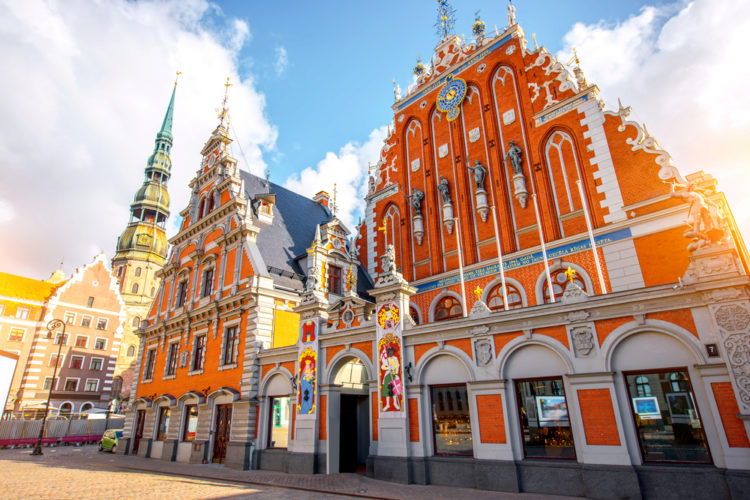 The House of the Blackheads in Riga is one of the main symbols of the Latvian capital and sights of Latvia. It regularly hosts cultural events, concerts, exhibitions, excursions. Also, the house temporarily became the residence of the Latvian president, in connection with the repair of the Riga castle.The foundation of the House of Blackheads dates back to 1334. Since its foundation, various meetings and events of Riga societies have been held here. By the end of the 15th century, the building was leased to the Blackheads Society, in whose honor it was named later. 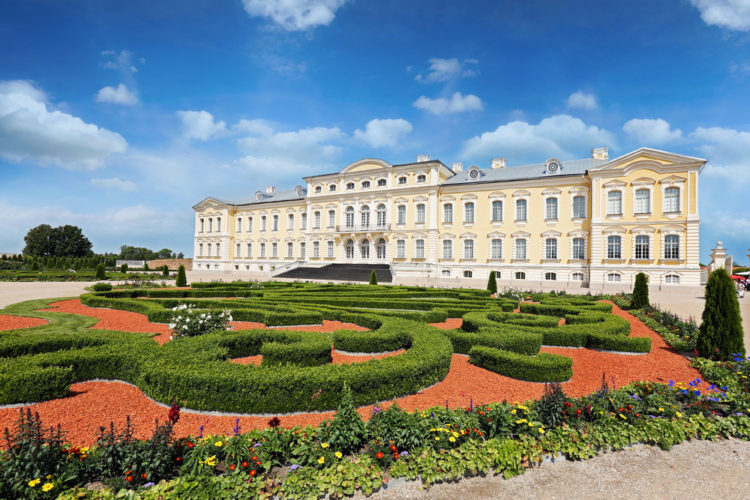 The former suburban residence of the Dukes of Courland 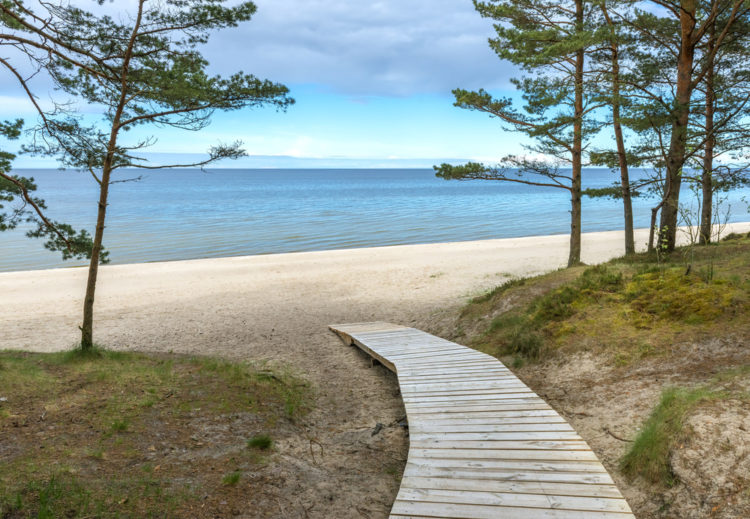 A wooden descent to the Gulf of Riga

Jurmala resort town is a real pearl of Latvia on the coast of the Gulf of Riga. The first resort villages of Jurmala began to form here in the 18th century, and already in the 19th century, most areas of the city acquired the status of resort. For more than two centuries, Jurmala has remained the place for a great interesting vacation, and you will surely find something to see in Latvia if you get to this unusually beautiful city.The list of Latvian sights in Jurmala includes more than 400 buildings of various kinds. A characteristic architectural feature of the buildings are the facades, richly decorated with lace wood carvings. The selection of attractions is wide, and the list can be supplemented endlessly. 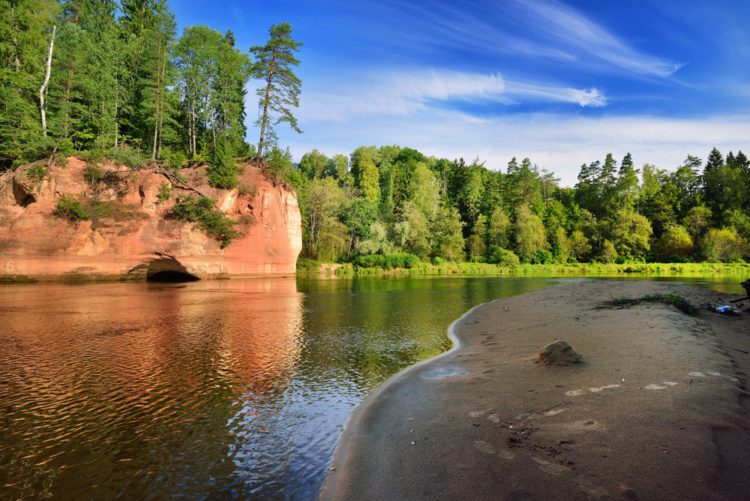 A cliff of Devonian sandstone along the banks of the Gauja River.

To visit some of the sights of Latvia, it is advisable to single out, perhaps, a multi-day trip at once. These places include the Gauja National Park, spread over the Gauja River Valley over an area of ​​more than 900 square kilometers - this is where there is something to see in Latvia.This is the largest reserve park in Latvia, which is characterized by a variety of landscape forms, numerous springs, cliffs, caves, rocks, outcrops of multi-colored sandstone, unique natural and cultural monuments. 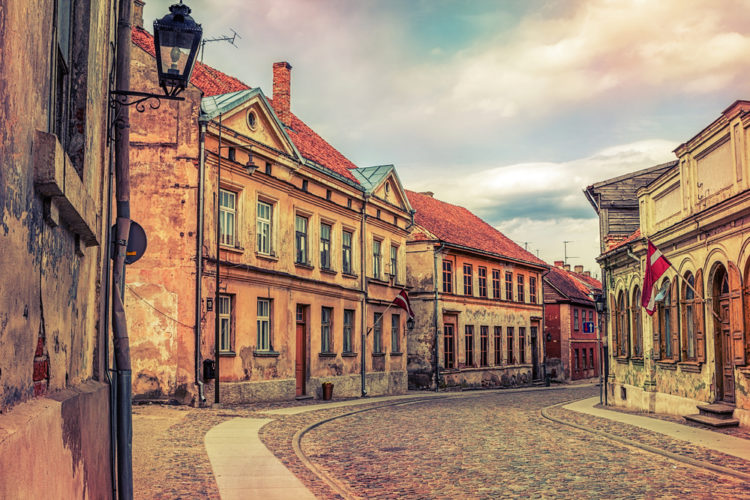 The old city of Kuldiga

In the heart of the historical Kurzeme region, on the Venta River, there is a beautiful provincial town of Kuldiga. It is rightfully considered one of the most picturesque cities in Latvia, because it is here, on a small territory, that you can meet a lot of amazing sights of Latvia - for example, flying fish, Europe’s largest waterfall, cave labyrinth and ancient palaces.Today it is difficult to imagine that several centuries ago this city was the most important trading point, ships were built here, grapes were grown, wine from which was even delivered to neighboring countries. 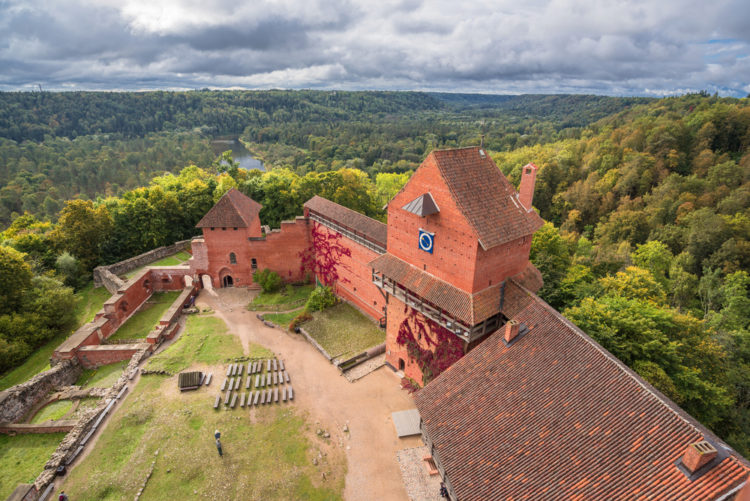 View of the western part of Turaida Castle.

Just 50 kilometers from the Latvian capital is a beautiful provincial town - Sigulda. His hallmark was the honorable landmark of Latvia - the 13th century Turaida castle. Once in the Middle Ages there was a bishop's residence, the Livonian Order was located and even a garrison of Swedish soldiers was located. Today, the fortress retains the imprint of antiquity, so the castle today has acquired the status of a museum complex, and a museum reserve has been created in its territories.The museum complex includes not only the castle, but also the mass of surrounding historical buildings - in total there are 37 such structures. The castle itself was founded in 1214 by the bishop of Riga on the right bank of the Gauja. Unfortunately, the fortress did not retain its original appearance from those times, therefore it survived a lot of reconstructions, but nevertheless, it did not lose its appearance.

7. Waterfall on the Venta River (Kuldiga) 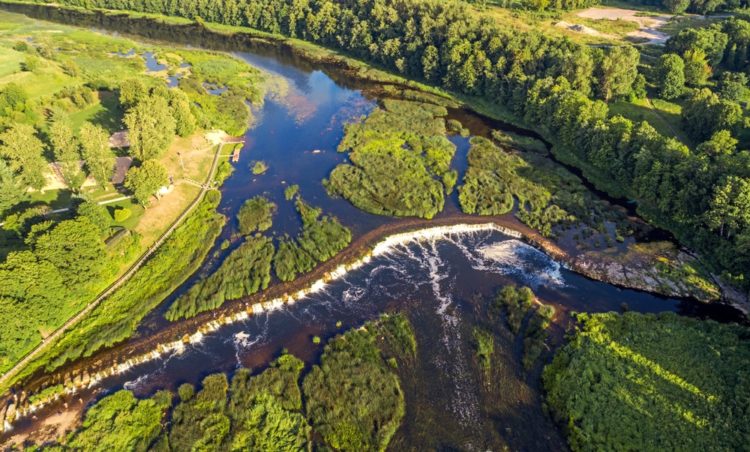 The Venta River and the widest waterfall in Europe is the Venta Waterfall in Kuldiga.

Despite the fact that Latvia cannot boast as powerful waterfalls as, say, Niagara or Iguazu, but on the territory of this country There is the widest Vent waterfall in Europe. Its width is about 110 meters, and in flood all 280 meters, although the height is very small - from 1.6 to 2.2 meters across the entire width. Due to the specific shape of the rapids from which the water falls, the waterfall has an amazing zigzag line. Regularly, at certain moments of autumn and spring, there is a spectacular sight - spawning fish trying to jump over the river threshold, and a few centuries ago this feature began to be used for fishing. Since then, Kuldiga is known as a city in which fish are caught directly in the air - for example, during the spawning season, from 80 to 100 salmon can be caught per day. 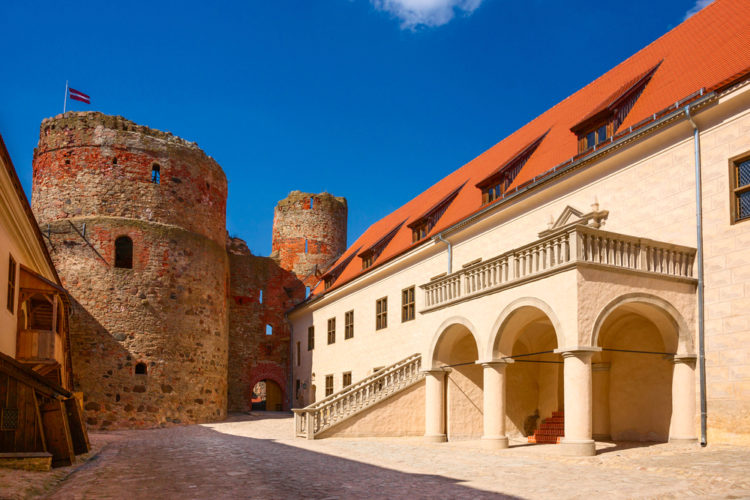 In the courtyard of the Bauska castle

Bauska is a city in central Latvia, in the Zemgale region. Founded in the 15th century by German knights, today Bauska is rich in historical monuments and keeps events of centuries-old history, so you will surely find what to visit in Latvia, once in this town. For example, the Bauska Castle, built at the confluence of the Musa and Memesele rivers for the knights of the Livonian Order, confirms this.The fortress was surrounded by a system of fortifications, later ceremonial halls and living quarters were erected.Soon after completion of construction around the castle formed a craft and fishing village, which later became the city of Bauska. 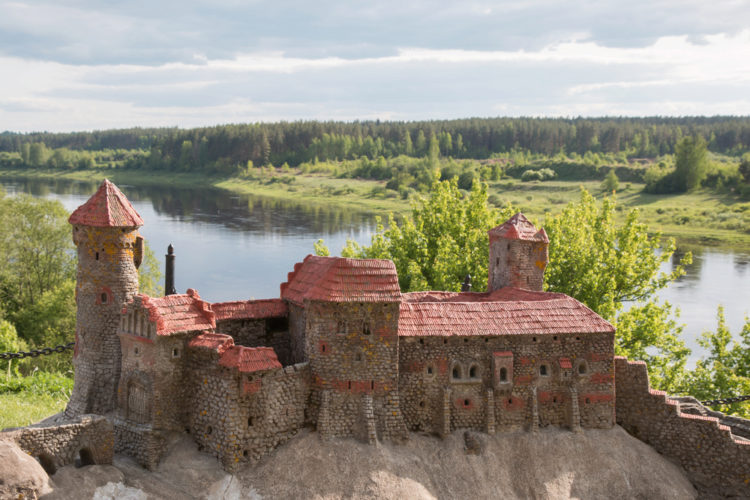 Miniature model of the castle Dinaburg

The beginning of the Latvian city, which has repeatedly changed its name (Dinaburg, Nevgin, Dvinsk, Borisoglebsk, Daugavpils), put the castle Dinaburg, erected in 1275 by order of the master of the Livonian Order Ernest Ratzeburg.This attraction of Latvia had its own difficult history - from the moment of erection for the castle, battles took place repeatedly, and it constantly passed into the hands of Lithuanian, Polish, or Russian authorities. 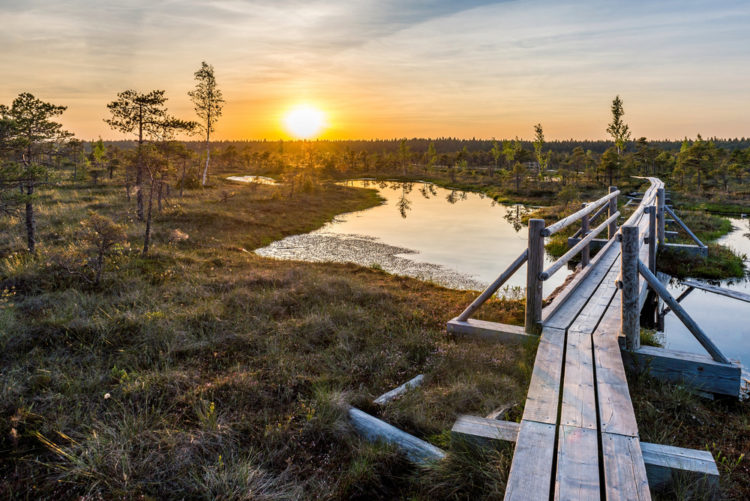 Sunset in the Kemeri National Park

In the central region of Latvia - Zemgale, not far from the well-known Jurmala, Kemeri National Park is located. The park area is colossal - more than 38 thousand hectares, and these territories are occupied by forests and swamps, under which hydrogen sulfide mineral water is formed in one of the soil layers. This attraction of Latvia is famous for its very rich vegetation and wildlife - for example, about 900 fern, more than 2,200 species of mosses, one and a half hundred lichens, more than 500 species of mushrooms grow here. A quarter of the plants growing in the park are listed in the Red Book of Latvia.

Posted in: Latvia, Sights of Latvia